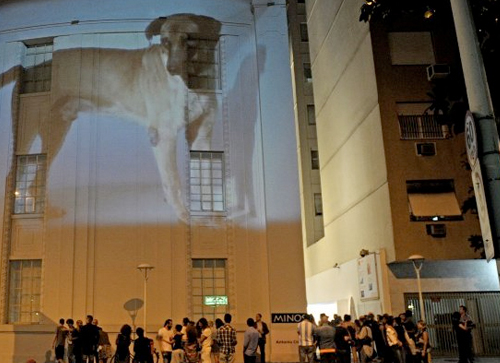 About           Curatorial Texts             Videos             Media
The conceiving of Vide Urbe sprung from an interest fomented by my own art research project, which I’ve been developing since 2003. The research focuses on expanded video on alternative surfaces or in connection with performances, as well as on more open, collective and collaborative territories of the city. In uniting so many interests I have sought to articulate increasingly collaborative contexts that enable the convergence of artist proposals, collectives and other participants in this field, investing in their power in creating other intersections in contemporary art and poetic dialogue between video, the public and the city.
In this first edition, I invited two veteran artists – Eder Santos and Simone Michelin -,who in the past had worked on specific pieces interfacing with Rio de Janeiro’s public space, and two young artists, Chico Jofilsan and João Penoni, who would be having this experience for the first time. I offered each one a different location in the city’s open space. Through the course of one week, between the south, central and north zones of Rio, four projections were installed in public spaces, creating new venues for video itself, creating poetic connections with different themes and issues regarding the city.
During the nights of collective interventions, which were destined only for video projection tests, we had the goal of integrating similar artistic initiatives with the creative input from Vide Urbe’s students Workshops, (recently graduated from Oi Kabum! Art and Technology School), which are residents from different communities in Rio de Janeiro. The young participants, two of whom worked on the project as monitors, formed the artist collective Vide Urbe/ Oi Kabum! and worked together mixing a series of videos created using their individual routes through the city as starting points. At the last three locations, the exhibition also had the participation of the art collectives ‘Filé de Peixe’ and ‘Estética Central’, and the artists Julio Lucio and Bernardo Marques, addressing these specific spaces, operating in a stimulating and generous partnership with the project. Another platform to join our route was Passeio Completo, which proposes bicycles as a means of transportation to the public in the city, through its various cultural events. The project Vide Urbe was selected by the Oi Program of Promoted Cultural Sponsorship, and as such, we rely on the support from Oi, the Secretary of Culture from Rio de Janeiro, through the law of cultural promotion of the state of Rio de Janeiro, and through the cultural support from Oi Futuro – partnerships that were essential for the accomplishment of this first version of the exhibition.
The curatorial process of Vide Urbe began with an initial survey of projectable surfaces, which led to the contact with artists, producers and collaborators. I acted as a mediator between artists and the urban context of the exhibition, my proposal being one of a video intervention, considering the singularities of its location in the public spaces of Rio de Janeiro. An important contingency of this first production process was the negotiation of the projection areas (building panels or façades), which required authorization from their owners or managers and by Rio de Janeiro’s city government through its responsible agencies – except for UERJ (State University of Rio de Janeiro), which has its own administration. Within the limits of maintaining the exhibition timeline and facing the time period needed for such (de)liberations, it was not possible to complete strictly site specific works. In this context, the challenge of creating or articulating projects that in some way orientated themselves toward themes that referred to the available locations in short term fell to the artists.

Though developed a priori, the installation of the image and its dispositives, for a few hours in full view of the public passing by, made some experiences and momentary redesigns of the (discursive and always under construction) city landscape possible. In this booklet of texts, I tried to focus especially on the associations between the works and their presence in the contemporary urban context. From the relationships between the image and its temporality to the poetic tension within the surface-support or its assimilation by the landscape through relations of continuity, the encounter also happened, sparked by a kind of extra-field, circumstantial to the video (the machinery of lights): a transitory concentration of people living new sociabilities through unexpected networks of contact and dialogue; the situation in the city at this intersection of so many deflections and possible social connections between the emergent imaginaries from Rio. May Vide Urbe be always, as the city already is, by itself, an invitation to critical reflection and its multiple free ways of occupation.

Video art, today, is embedded within a long history of critically addressing the traditional and commercial formats of the moving image. The dark room, specially, a model taken from the Elizabethan Theatre, which has been the most hegemonic form of “film-installation” until the present. The video installation, or even works of so-called expanded cinema , as well as the cinema-dispositive, have contextualized video in space, and exposing its structure, mechanisms, and its own specific discourse strategies. Closed-circuit video installations have expanded ideas related to intrinsic questions of ‘live’ imagery and surveillance systems; site-specific projects, offering institutional critiques inside the very galleries and museums where they are exhibited.
For just over a century, the language of film has built imagery and symphonies of the city, incorporating and inflecting the urban landscape in time. The mimesis city-cinema has made itself present in bodies and in ways of seeing. The dynamic perception of the city takes on the “beat” of cinema, much of it coming from forms of collage/bricolage, and of cinematographic editing. The passerby’s bodily time turns into a fragment-editor, with the construct “urban landscape”, generated by cinema as support, affecting both our (current) vision as well as our (virtual) memory of the city, among clichés, deletions and epiphanies. By itself, expanded video in the expanded field of city streets can generate, through a diversity of sign operations and through the projection-dispositive, not only experiments related to previous discussions in the history of video art, but also actual technological possibilities. Video in the expanded field can also generate the most varied aesthetic responses and a specific, plural and relational experiential environment, unlike the movie’s dark room silence or the white cube of galeries and museums.
The increasing dissemination of large-scale projection apparatuses also allows video in public spaces to be connected with experimentation as it is found in the world at large. The wider access to the means of production and distribution of the audio-visual materials and new media, as well as appropriations from the remix culture and from veejaying, also catalyze these practices. Nevertheless, we see today, the most sophisticated open-air video mapping projects promoting, for the most part, brands and events through the rhetoric of technological I Vide Urbe Exhibit Contexts and experiences [ Ipanema, Centro, Lapa and Maracanã, Rio de Janeiro, from 5th to 11th May ] spectacles in the high-tech mannerism of 3D modeling-simulations. In Rio there have been fewer cases of artists with video interfacing with the streets. In this sense, Vide Urbe responds to some demands by operating as a collaborative platform for projects of video intervention. The idea is to support the production of works capable of creating new visualities in the city itself, through this language and its hybrids, understanding landscape as a network for exchanges, thought, transformations, tensions and contemporary political and aesthetic intersection.

Vide Urbe I Catalogue in English