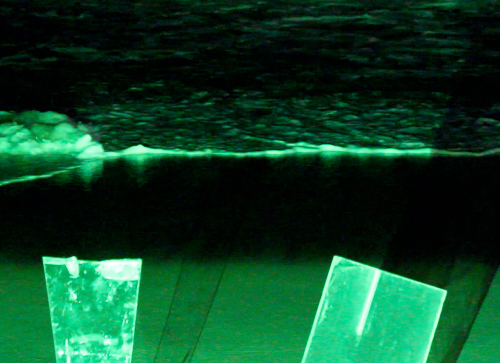 About           Images             Vide Urbe             Links             Media
In September 2012 we were invited by Art Rio, the international contemporary art fair of Rio de Janeiro,  to participate in its programe with an exhibition organized by our collaborative platform. The Parallel Exhibit Vide Urbe-Art Rio gathered 3 videointervention proposals that had in common the openness to public participation, as well as proposals involving street art and favela culture (Battle of the Image), live telematic performance between Rio and Holland (RioAmsterdam2012) and mobile projections (Poez Pix).

In its interface with the city and its multiple dispositives for meeting, reinventing and building the common, Vide Urbe bets on the power of video in the streets, squares and other vital spaces of coexistence of differences- as a language expanded through hybrid and plural artistic approaches. Vide Urbe is the first show entirely dedicated to outdoor video interventions in the city of Rio.

At this moment, the partnership with ART RIO reflects the common desire in making contemporary art more public and accessible, so that new audiences are able to experiment the city itself as an artistic creation. For Vide Urbe Platform it’s also a matter of extending the circuits of production, assimilation and circulation of art, through a collaborative platform that enables such projects and partnerships, contributing to broadening sensitive fields for contemporary art in interface with the city.

A parallel action by Vide Urbe platform was proposed in the format of a touring exhibition of video interventions in various parts of the city, within the ART RIO program, for 5 nights, between September 12 and 16th, 2012.

TV Parede  + BATTLE OF THE IMAGE – Experimental video, appropriations of the television media, remixing and street culture of Rio are in the same space, open to the interference of the public and the improvised rhyme of MCs. :: 13/09, Thursday, from 8 pm to 11:30 pm – Largo da Carioca, near to R. Almirante Barroso, Centro.

In its interface with the city and its multiple dispositives for meeting, reinventing and building the common, Vide Urbe understands the urban video interventions as an expanded language through hybrid and plural artistic approaches, enabling public spheres in squares and other vital spaces of coexistence of differences in the city. The kinematic experience is permeated by diverse technologies and situations, amplified by the displacements of traditional spaces and circuits, and in full diffusion through greater access to their means of production. The place of video in contemporary art has also transformed its own theory, so that we think of the image as a phenomenon, an intersection of forces, relations and affections.

Vide Urbe is the first itinerant show dedicated entirely to video art in public spaces in Rio de Janeiro. Motivated by my own experience as an active artist in this field, and also by the desire in common with so many other artists and collectives, we seek to create contexts that enable and disseminate video works in poetic and crtical connections with the open and collective territories of the city, which naturally widens and renews the circuits of production and assimilation for contemporary art in the city.

Through a collaborative curation with artists and projects, we stimulate works capable of creating new visibilities about the urban landscape, understanding it as a network of exchanges, thoughts, transformations, tensions, and contemporary aesthetic and political crossings. In direct contact with the street, the videos reach a public in transit, provoking even more heterogeneous perceptions about the construction of their own poetics. How can the artist act on this landscape, concrete and at the same time discursive? Which other or continuous spaces can be created by the video in the interface with the overexposed skins of the city? Why still produce images in a world hyper-inhabited by images?