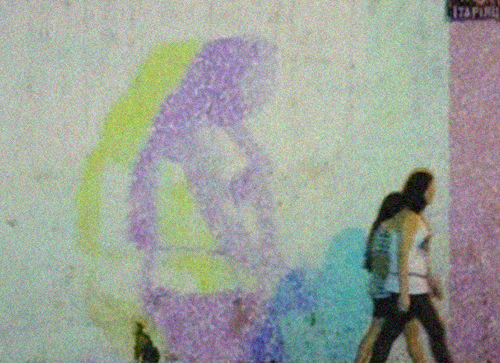 WE ARE ALIVE (Estamos Vivos)    The venue: Catumbi cemetery wall. On one side, the silence, the lifeless, the memory of lives that have passed. On the other side, the “life out there”, the lives that pass by and also dance, celebrate, play, drink, eat barbecue, and project videos at an unusual moment, since this space is often seen as “dead”, “abandoned”…

In “We’re alive”, the video does not culminate in previously edited, crystallised memories; it just expresses this fortuitous “now”, yet still able to produce new memories. Not the realistic mirror of bodies outlined by ambient light, but the “ghostly” bodies- alive, multiplied as pure light, color and blur on the wall’s concrete, for a few hours following the human flow that becomes suddenly “invisible” when a neighborhood becomes a passage way, devoid  of its identity, by the macro-politic logic of urban administration.

What’s the difference between revitalisation as a urbanisation plan, and the activation of  “living spaces”, in a collective and spontaneous way, by the genuine city communities? Over time, the characters, centers, peripheries, pains and joys of the city are also transformed. What does revitalisation mean, then? Life always urges. Life always stands beyond urbanisation planning, architecture, and also beyond image and representation.