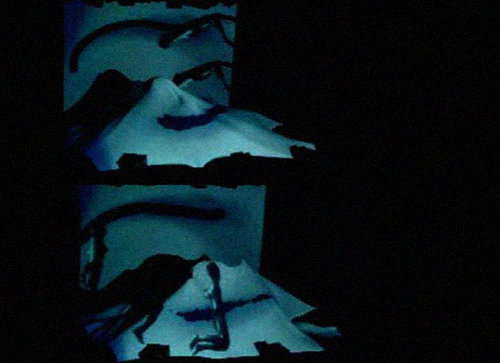 EYELID proposes to share a dream with the public. A projection machine body is the metaphor for this “organic” video playing in and outwards, in rapid eye(lid) movements. The video consists of animation loops, fragments of memory and imagination in non-linear micro-narratives, projected onto a moving screen created by the body of a performer. The digital image sequences were created and or appropriated for the piece, and real time activated through invisible buttons in the accompanying interactive movie/animation.

A dancing and undefined body, shaped by the resistance of an elastic fabric on the stage, determines the projection’s fluxes. There is a projected body outside, that dives, falls and flies; and there is a real body, that dreams and reacts to the dream, inside the eyelid, at state of R.E.M. This “eyelid” is a receptacle to “dreamy images” connected through the projected character of a body that suggests sometimes a diving movement, or flights in the empty space, at the rhythm of the music. The original soundtrack (which mixes domestic environment sound, guitar, incidental voices and indian mridang percussion)is also fragmented, inspiring sudden breaks and a not very fluid tweening in the animation.

The videoperformance was shown during 4 Fridays of May, 2004, at “Hora Zero” (Zero Hour) performance program at Teatro Café Pequeno, Leblon, Rio de Janeiro. 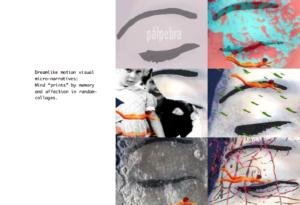 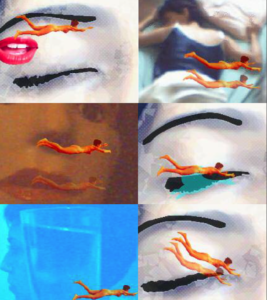 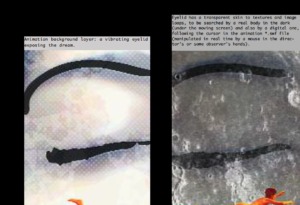 EYELID II (Photo frames) We may not remember a dream as we wake up, but everybody dreams and at least some fragments may remain as conscious memory. From frame to frame, in these still pictures, you can notice how the moving screen turns into instant sculptures of body, air and light. Such plasticity and dance are amplified in this sensitive performance, also presented as a series of stills from an audiovisual record of the original videoperformance.

The series was part of the celebration exhibition for the 10 years of NAT-EAV (Nucleus for Art and Technology –  School of Visual Arts of  Parque Lage, Rio de Janeiro), in October, 2006.