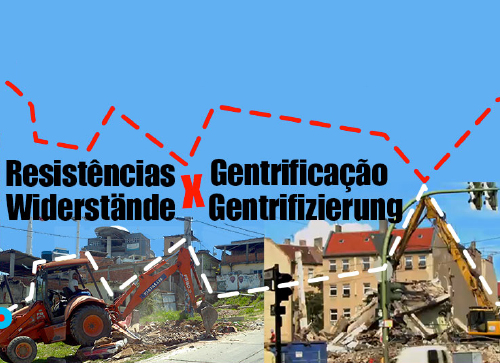 The aim of the meeeting (live and telematic) is an observatory for practices of occupation of public or private spaces or the resistance of populations to remain or to be able to shape them in these places. Examples of two large cities in Germany and Brazil are presented with a brief contribution of different initiatives. A video call with members of “ Ocupa Alemão “, “ Instituto Raízes em Movimento”, “ Jornal Alemao Notícias “ from Rio de Janeiro and from members of TeePee country , Free Cuvry , and Ideenwerkstatt Freudenberg area of Berlin will contribute to the discussion. Topics include the history of the occupation in both cities, their specific contexts and self-organization as a tool to establish a formal articulation in areas towards public or private owners, as well as the expression and resistance movements in the favelas (slums) against arbitrary government urbanization projects, also linked at the time linked to the sport megaevents about to take place in Rio, such as Fifa’s World Cup and the Olympic Games.

Through the dialogue between such different places and contexts , we encourage the sharing of important information regarding the abuse of human rights in a globalized gentrification. Side effect of a “ greedy “ financial market and civil strategies to prevent the situation will be shown and discussed by the reinterpretation of basic terms such as “ public” and “ citizenship “ .

The first portal experience, connecting Berlin and Alemão, happened in collaboration with alter.nation, Cuvry, Teepee land, Ideenwerkstatt Freudenberg Areal, Ocupa Alemão, Raizes em Movimento and Barraco#55. On the other side, Thainã (Ocupa Alemão) tells us that the other collectives’ participants can not be there, as everybody was busy in task force to help the people that lost their houses during the heavy rains in the beginning of the month. Both Ocupa Alemão and Instituto Raizes em Movimento were engaged in denouncing the negative effects of the Accelerated Development Program (PAC)

The present participants could share what was happening here and there, which tools and procedures they had in hand to defend themselves and develop communitarian collaborative projects. 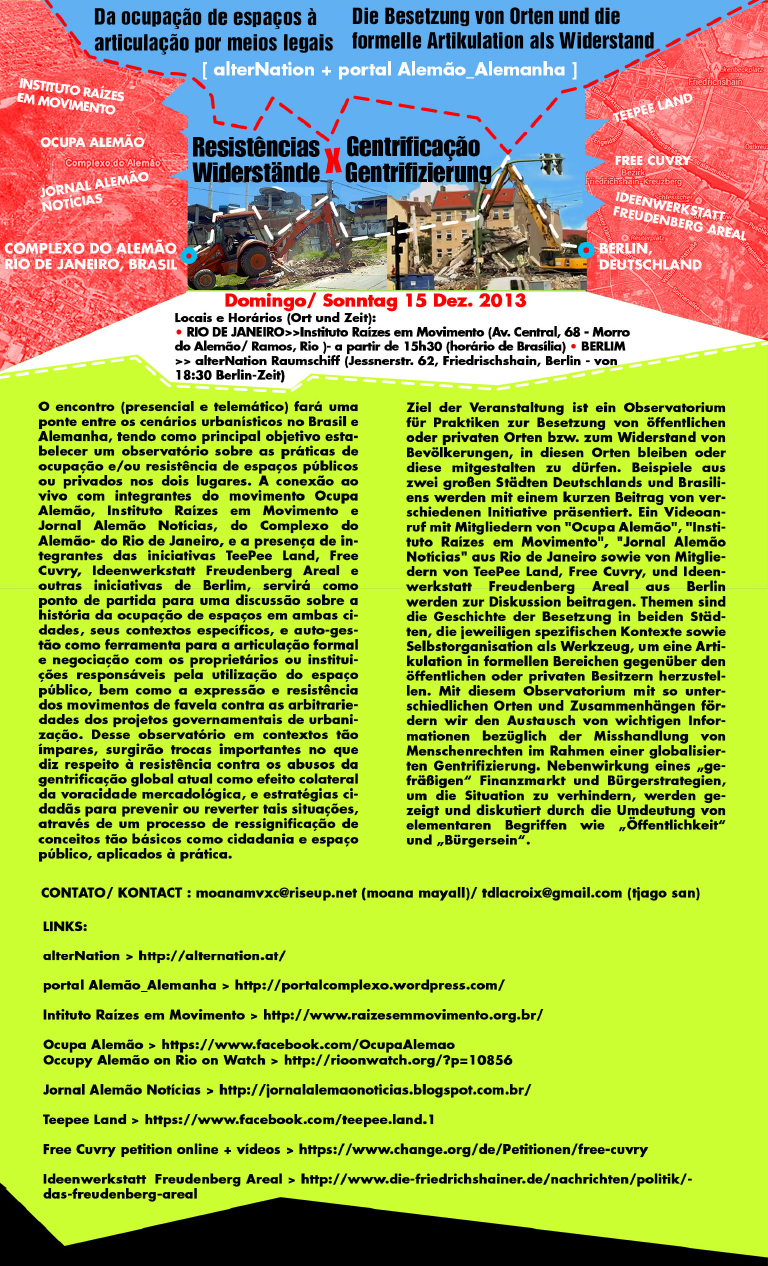 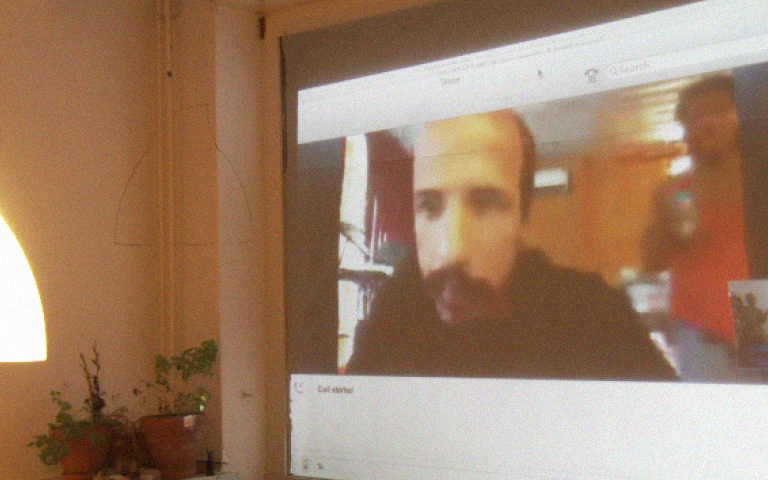 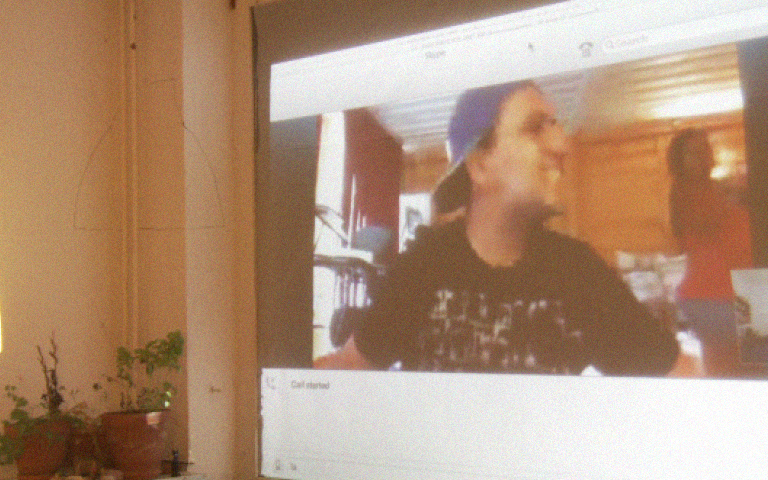 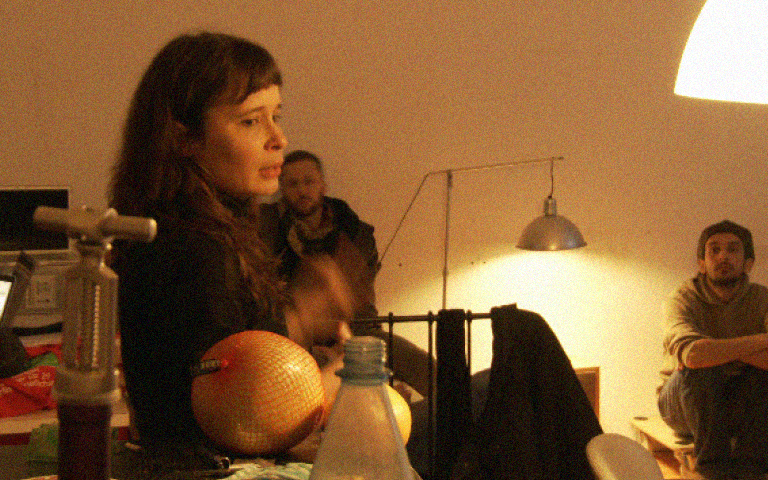 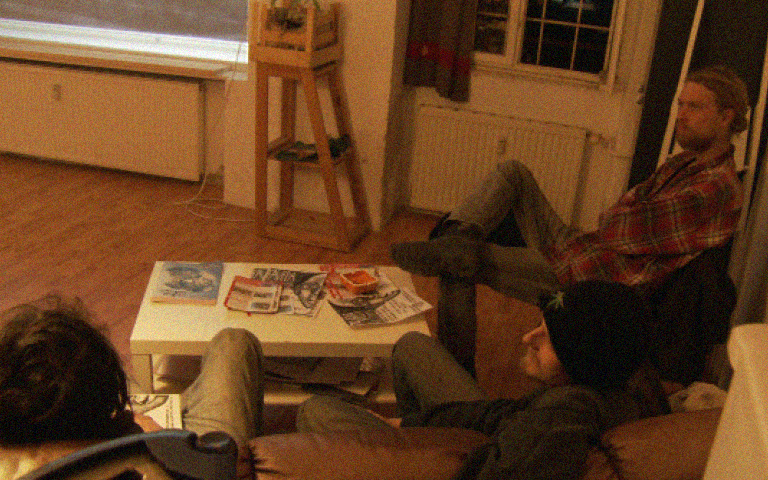