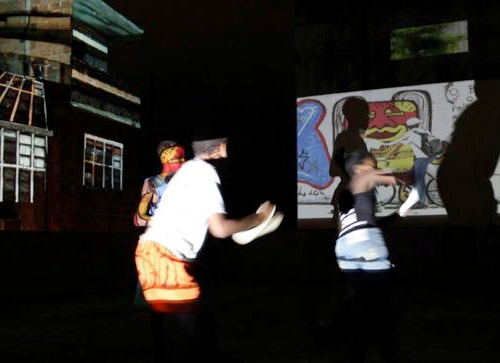 The streets of Rio invite you to see, interact and reimagine the city! From June 13 to 22, 2012, the collaborative platform Vide Urbe brought together artists and collectives with videointervention works and essays – in the poetic interface with the city and its multiple devices for meeting, reinventing and building the common. Over the course of two weeks, integrating the Imagina Rio program during Rio + 20, our itinerary included the community of Cantagalo, several squares in downtown Rio, Central Station of Brazil, Parque Lage, as well as neighborhoods in the north, like the Maracanã and the Pavuna.

We encourage the participation of several artists and collectives through the open meetings held by the Vide Urbe Platform in the project’s studio in the Apis Space on Rua Riachuelo, in order to provide the means of experimentation, production and development of their projects, in an exchange environment and sharing of knowledge, tools and experiences, which also preceded the selection of works inscribed in our convocation by the collective curatorship for the II Mostra Vide Urbe.

We are a meeting point and intersection of desires and imagination about the city. A “collective of collectives”, itinerant and always in formation, open to artists, non-artists, activists, poets of image and free occupation, collaborators with diverse trajectories, at the interface between art, video, city, technology and sustainability, as well as as urban intervention practices and synergistic actions with other proposals besides the Vide Urbe show.

As a collaborative and pluricartographic platform, we have sought to add video to actions, experiences and activations of portals in public spaces around diverse territories of the city of Rio de Janeiro, collaborating (with each other) with cultural street vendors, such as  Comando Selva, in addition to other artistic and critical initiatives in this sense (Central Aesthetics, Complete Tour, Collective Filé de Peixe, COVIL, Eta Aquarídea, “The Maraca is ours”, Aldeia Maracanã etc).

As a platform, we are also an open group of interdisciplinary studies, sharing tools and knowledge that support artistic projects of urban videointervention (also associated with other languages, expressions and free forms of occupation) – from the constant flow of knowledge produced around the city, until the dialogue with proposals in aesthetic, conceptual and technological terms. We hold meetings, workshops and other actions that we openly advertise in our networks for those interested in participating and collaborating.

We seek to create contexts that enable and disseminate video works in poetic and critical connections with the open and collective territories of the city, creating contexts receptive to both the collective experimentation and the inclusion of the public as a participant in the video occupations. In this context, we will also be able to offer live video workshops in the open, involving participants in collective work.

With the Vide Urbe * exhibition, inaugurated with Dogville, by Eder Santos, on the façade of Oi Futuro in Ipanema, we began a pioneering trajectory in this artistic field, which adds the poetics of video art to those of urban intervention. In our shows we have added, in the works of Brazilian and foreign artists, both dialogue with the city and research and experimentation with video and new technologies. In order to make these new practices and artistic productions feasible, we aim at the realization and design of the exhibitions together with other researchers, thinkers and curators of visual arts. We also encourage the participation of other artists and collectives who, in 2012, were present at the open meetings held by the Vide Urbe Platform, in order to experiment and develop their projects, in an environment of exchange and sharing of knowledge, tools and experiences that preceded the selection of works by a collective curator.

In June 2012, Vide Urbe platform + artists and associated collectives gathered more than 30 projects from various Brazilian and international artists and collectives, making it possible to do so, as well as a stage of experimentation and development for the projects included in the II Vide Urbe exhibition. Over the course of two weeks, integrating the Imagina Rio program during Rio + 20, our itinerary included the community of Cantagalo, several squares in downtown Rio, Central Station of Brazil, Parque Lage, as well as neighborhoods in the north, like the Maracanã and the Pavuna.

The II show Vide Urbe *** gathered more than 20 works of videointervention, in four different points of the city. In addition to the invited artists Ivan Henriques and Claudia Hersz, 5 artists were selected through our call for a committee that had the special participation of artists, curators and thinkers in the interface between art, video and urban intervention (Ivana Bentes, Renato Rezende, Alexandre Vogler and Simone Michelin). Other projects, also included in the call, participated as partners in the Vide Urbe II show, having as a counterpart the production and assembly of their videointerventions, through our collaborative platform.

In September 2012, as a consequence of the recognition of the quality, importance and pioneering of the project Vide Urbe, we were invited by the international contemporary art fair Art Rio to participate in its programming with a parallel action of the Vide Urbe platform. The Parallel Exhibit Vide Urbe-Art Rio gathered 3 videointervention proposals that had in common the openness to public participation, as well as proposals involving live telematic performance between Rio and Holland (RioAmsterdam2012), mobile projections (Poez Pix) and street culture (Battle of the Image).

In 2013 we are carried out some collaborative actions at the Barraco # 55 residence, in Complexo do Alemão. A workshop on the streets, open to the residents of Nova Brasilia favela.